High Altitude Soccer Back On

Almost exactly a year ago, Geek Buffet’s Sports category was inaugurated with the post “Altitude Discrimination?“, about FIFA’s controversial decision to ban matches at altitudes above 2500m. Today, I spotted this article saying that FIFA has suspended the ruling.

It appears the initial ruling had undergone some changes since I noticed the original article. According to the one today, the rules ended up going into effect this way:

Fifa imposed a limit for international matches of 2,750m (9,022 ft) altitude in December.

Under the ruling, players could only take part in matches above this altitude if they had had one week to acclimatise, rising to 15 days for games above 3,000m (9,843ft).

Due to the protest from many countries in South America, particularly Bolivia, FIFA is now forming a committee to look further into the true effects of playing in extreme conditions, including high altitude, as well as “heat, pollution or humidity.”

Hopefully I’ll notice when those results get reported on, whenever that happens. I’d be interested to see what they find, and how they decided to test such things for the specific purposes of soccer-playing.

Cultural Ascendancy of the Geek

David Brooks published an op-ed yesterday on nerds, geeks and politics. He finishes “The Alpha Geeks” with the line,

the last shall be first and the geek shall inherit the earth.

If he’s right, what will we do with this one precious earth of ours? And is his take on geeks accurate on an international level, or are these exclusively American geeks we’re talking about? Finally, is Geekdom truly welcoming to women and minorities or is this simply another form of domination by a different (albeit generally more sensitive) group of white men?

Thanks to Courtney for the tip!

Going to the Chapel… to watch other people get married

Tomorrow will be the 3rd wedding I’ve attended this month. And I thought last summer was wedding intensive!

I’ve been to people getting married by a non-religious friend in the middle of a park and I’ve been to a full mass and everything in between. There have been many differences between the various ceremonies, but a few major constants:

The big one being, of course, the celebration of a couple’s committment to spent their lives with love and each other. That’s a beautiful thing.

The other is the fact that many, many people have no idea what’s appropriate to wear to a wedding. Let me help.

END_OF_DOCUMENT_TOKEN_TO_BE_REPLACED

Sleight of hand and misdirection

I keep meaning to write something substantive here, but I’ve been distracted by the conversation going on over at Mike’s academic blog, Ad Nauseam, specifically on the post “Finding the countercanon.” Originally, Mike posed his problem and request this way:

But then in the comments, other interesting questions related to his desire to learn about non-English-department-approved literature comes up:

So few of the students who go through intro lit classes will pick up a book after they graduate. Lit profs have only the 14 or 15 weeks it takes to satisfy a gen ed requirement to give students a map of the literary library, so that students who don’t have your natural drive for reading will at least get a sense of what’s out there, and feel that at least one author connected with them and represents something like their inner & outer lives.

This is part of why my own canoniphilia distresses me: I’m already at a demographic remove from the great majority of American students; if my syllabi are demographically identical, then I have that much less of a chance of breaking through to the infrequent or non-reader.

END_OF_DOCUMENT_TOKEN_TO_BE_REPLACED

Say you’re a geeky guy. Maybe you don’t really tend to go out dancing or clubbing under your own volition. Maybe you communicate more clearly by typing than speaking. Maybe you’re in a male-dominated field, or nobody you work with shares your unique, thoughtful way of looking at the world. Maybe you’ve always dated friends and are finding it harder to meet people post-college.

Maybe online dating would help you out!

First of all, a caveat. The mere fact that I have a couple of years of experience with internet dating in some sense indicates that I haven’t been succeeding with it, since I’m mostly interested in finding someone compatible and totally awesome who finds me compatible and totally awesome and getting the heck off the internet. (I was in a relationship for a while with someone I met online, but it didn’t work out.) So take my advice with a grain of salt.

Said grain taken, online dating has a lot going for it. However, you’ve got a lot of competition, because there are a lot of nerdy girls online, but way more nerdy guys. You’ve got to make yourself stand out. 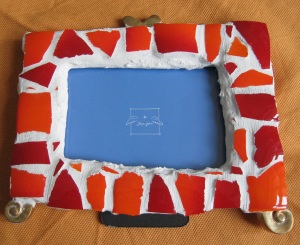 We geeks are nothing if not crafty. In our small ranks, we have knitters, embroiderers, beaders, photographers, printers, and graphic designers — producing a variety of items for personal enjoyment and sale. Chief Geek Dana has inspired me with her crafting posts (you see, she decorates tea tins and recently learned how to make temari balls) over at From My Wandering Mind to post on a little project I completed yesterday as a birthday present for my roommate. I encourage my fellow crafty geeks to take a couple pictures of a project they’ve completed this summer and post them here for everyone to enjoy!

To find out how it was made, END_OF_DOCUMENT_TOKEN_TO_BE_REPLACED

It’s starting to be the summer travel season! This means that now is the prime time to play the license plate game (in the US), particularly if you’re going to be in the car for any extended length of time, or if you will be visiting high density tourist destinations, like national parks.

Playing the game is very simple; designate a passenger to keep a record of all the different license plates anyone in the car spots. The goal is to get as many of the 50 as possible, or 51 if you are in a prime spot to see a Washington, DC plate. You can also keep a bonus list of the number of Canadian provinces you spot. I have a feeling that this would be an auspicious year for me to play, because I saw a Hawaii plate on my way home from work yesterday, and I’ve seen about 3 Alaska plates in the last week.

If you’re feeling ambitious, we could try to work out a point system in the comments based on the rarity of various license plates. If you live outside the US and have a different version of the game, tell us your rules. And if you go on a trip this summer, leave a comment with your list. (To be fair, you should only submit a list that you managed to compile over the course of one trip.)

The Obama/Clinton divide you haven’t been hearing about

It’s a story (followed by an argument, followed by facts) about the biggest split within the Democratic Party. It starts with two groups.

Group A is a social minority whose political and cultural power exploded during the 1960s. As that decade went on and certain factions within Group A grew more militant, Congress pushed to extend voting rights to millions of disenfranchised people in Group A. Today, Group A is shrinking as a share of the population, though its leaders remain visible and outspoken – and though its members increasingly dominate pop culture and the entertainment industry.

Group B, by contrast, holds sweeping political power. Much of the machinery and benefits of government have therefore aligned in Group B’s interest, despite the fact that Group B’s members are about half as likely to live in poverty as those of Group A.

Though they’ve often joined the same political coalitions, Groups A and B face a deep cultural divide on issues from the war in Iraq to gay marriage. In this year’s Democratic presidential primary, those fissures have showed up in state after state across the country, with Barack Obama winning Group A by colossal margins almost everywhere he goes and Hillary Clinton winning Group B by margins almost as big. It’s such a clear split that it seems to threaten the party’s unity.

Oh, by the way: Though no member of Group A has ever been elected president, more than half our presidents have belonged to Group B.

END_OF_DOCUMENT_TOKEN_TO_BE_REPLACED

Which Albums Have Shaped You?

A recent post over at Good Readings (the new blog of Ryan Williams, a Grinnellian once removed) mentions the 15th anniversary of Liz Phair’s album “Exile in Guyville” — an album containing such classics as “Divorce Song” and “Fuck and Run.” Ryan links to an article by former Sleater-Kinney rocker Carrie Brownstein describing the album’s influence on her when she first heard it in 1993. He then goes on to describe his own relationship to the same album, one whose adult themes were enjoyed clandestinely “alone in my bedroom with my headphones on, listening with a uniquely teenage intensity of focus and emotional engagement.”

Is there anyone among us who cannot sympathize with that statement? Each of us could identify a few sentinel albums in our lives: those calling out to us clearly with their music, vocals or lyrics and which, despite the onward march of time, soldier on inside our heads and hearts and on our playlists.

So fellow geeks, which albums have shaped you (your world view, your understanding of music) significantly? Please also share which song you believe to be the most underrated on the album — never a hit, rather the kind of gem you discover only by purchasing the whole disc and (perhaps warm up to) listening to it incessantly.

I first fell in love with Carl Orff’s Carmina Burana in the spring of 2001. I was taking a seminar on medieval German literature, and our professor brought in a CD player one day. Without saying a word, he pressed play, and out blasted “O, Fortuna!” It was thrilling, and at the end he beamed around the room and said, “Aren’t you ready to go fight something now?” We all yelled “Yeah!” (or perhaps, “ja!”)

Most of you would probably recognize “O Fortuna” when you heard it, whether you knew that’s what it is or not; it is often used in commercials and movie soundtracks and is one of the most dramatic choral passages I know of. Unlike most choral works I am familiar with, though, Carmina Burana was not written as a mass or other form of sacred music. No, this is one of the bawdiest pieces of classical music out there, but since no one can understand the words it usually passes muster without anyone batting an eyelash.

END_OF_DOCUMENT_TOKEN_TO_BE_REPLACED

Geek Buffet
Create a free website or blog at WordPress.com.