Sacred Harmonizing with the Subway

This morning on my way to work, I caught a story on NPR about the Tibetan Gyuto monks: Gyuto Monks: Ancient Practice, Modern Sound. The excuse for the story was that there is a new CD being released of their chants that more accurately reproduces the sound of what a full choir would have been like. Really, though, most of the story was about how these monks and their overtone (or throat) singing came to the attention of the outside world. The part I particularly liked was near the end, when they interviewed another monk who has already become famous as a singer in the US:

One of the first Tibetan monks to make his name in the West as a musician was Nawang Khechog, who was nominated for a Grammy in 2001. He says these chants are among the most secret and sacred of Tibetan Buddhism — that’s why they’re so heavily layered and deliberately hard to understand.

“Very secret practice,” Khechog says. “Secret as well as sacred … So, therefore, to hide the words, in the general public, it’s disguised in that kind of multitonic sound.”

[…] Khechog says that when he used to live in New York, he would get funny looks when he tried to harmonize with the subway trains.

“I start the chant, and then suddenly the train’s gone,” Khechog says, “and I’m still chanting that, and suddenly, few people standing there, and they think, ‘What’s going on,’ you know?”

I think it would be awesome to run across someone trying to harmonize with a subway train. Too bad there really isn’t any public transportation where I live.

Anyway, if you want to hear some of the singing, there’s a bit in the audio version of the NPR story, and also some longer pieces in the sidebar links on the article page, one of which I’m listening to right now. So there you go, my cool thing of the day.

This has been one of those weird and inadvertantly synchronous weeks, where the same topic keeps cropping up in completely different and unrelated ways. Since I find early American feminism and the suffrage movement interesting, I decided to share.

First, on Monday, I heard a teaser for an NPR story that I made a mental note to go back and listen to later online. I just did, and it was the fascinating story of Victoria Claflin Woodhull, “The First Woman to Run for President – in 1872.” Woodhull turns out to have been quite a controversial figure, stating in speeches her opinion that marriage was akin to slavery and advocating her right to practice “free love,” meaning that she should have the freedom to both love and change her mind. (She had been sold into marriage very early in life to an alcoholic, so she had some strong views on the matter.) She didn’t sit well with many of the suffragists of middle class, “more serious” backgrounds, but she was quite sincere in her beliefs and did become the presidential nominee for the Equal Rights Party. (Frederick Douglass was nominated as her vice-president, but without being asked. He declined to even acknowledge the nomination.) In the end, her name didn’t even appear on the ballot.

This tied in eerily well with the mystery series I recently rediscovered at the library and had just checked out two more books in, the Seneca Falls series by Miriam Grace Monfredo.* The series begins during the events surrounding the Women’s Rights Convention of 1848 and then continues on through the Civil War. The main character, Glynis Tryon, is the librarian for the town of Seneca Falls, NY, and a very independent, staunchly unmarried woman. While the mysteries she keeps getting somewhat reluctantly embroiled in are obviously fictional, as are many of her friends and relatives, the reader still encounters quite a bit of historical fact as well.

END_OF_DOCUMENT_TOKEN_TO_BE_REPLACED 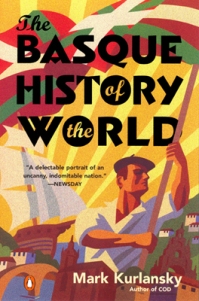 I seem to have stored up a backlog of book reviews that I’ve been meaning to post, so I’ll start trying to clear them out of my head and onto the internet now. This first one is somewhat unusual, in that it’s actually non-fiction, which I haven’t been reading much of lately.

This book actually has to be paired with a radio story. Back in May, before I had to leave for my 3-week business trip to Asia (I’m chronicling that over on my personal blog), I heard this piece from the Kitchen Sisters on NPR, from their Hidden Kitchens series: The Sheepherder’s Ball: Hidden Basque Kitchens. While my own cooking skills are notably underdeveloped, I find this series fascinating for the way it explores history and culture through the initial touchstone of recipes and food. In this case, they revealed the existence of a sizable Basque community in the US that I had never heard about before.

Francisco and Joaquin Lasarte came to America in 1964 from Basque country in northern Spain. Francisco Franco, the Spanish dictator who repressively ruled the country for nearly 40 years, made life miserable for the Basque people, suppressing their language, culture and possibilities.

The result was a massive exodus, and the only way to come to the United States for many Basque was to contract as sheepherders. There was a shortage of shepherds in the American West, and Sen. Patrick McCarren of Nevada helped craft legislation in 1950 that allowed Basque men to take up this lonely and difficult job.

Neither Lasarte brother had any sheepherding experience when they arrived in America.

END_OF_DOCUMENT_TOKEN_TO_BE_REPLACED

Last week’s “This I Believe” essay on NPR was by cellist Yo-Yo Ma, who had some interesting things to say about transnationalism: A Musician of Many Cultures. Given that I just went to a conference on international education, this seemed particularly relevant, especially since the sessions I attended focused a lot on why study abroad experiences and cultural competency skills are important for more than just foreign language majors. Some excerpts:

I believe in the infinite variety of human expression.

I grew up in three cultures: I was born in Paris, my parents were from China and I was brought up mostly in America. When I was young, this was very confusing: everyone said that their culture was best, but I knew they couldn’t all be right.

I felt that there was an expectation that I would choose to be Chinese or French or American. For many years I bounced among the three, trying on each but never being wholly comfortable. I hoped I wouldn’t have to choose, but I didn’t know what that meant and how exactly to “not choose.”

END_OF_DOCUMENT_TOKEN_TO_BE_REPLACED

How important is experience?

I happened to catch a few minutes of Talk of the Nation on Monday, while on my way to and from lunch. They were, as is becoming ubiquitous of late, talking about the value of experience, in particular as it relates to the Democratic presidential nominee candidates.* Given the show’s talk-show format, many people were calling in to talk to the host and the guest presidential historian about their own experiences with, er, experience, leadership, and the lack(s) thereof.

One person told an anecdote about a nurse who had “too much” experience, which made her complacent, and forgot to do something. Others told of experienced people in leadership positions who were made inflexible by this past experience, also making them unwilling to consult others.

On the other side, another guy called to talk about how flexibility and willingness to change is great in an entry-level position, but as one rises through the corporate structure, experience is more desirable and more necessary, (presumably because the entry-level people expect to have someone around who knows how stuff works and has been done in the past.)

But through it all, I kept thinking about the statement I saw from one of my favorite history professors not that long ago:

END_OF_DOCUMENT_TOKEN_TO_BE_REPLACED

The Hardboiled Roots of Modern Mysteries

I’ve always liked mysteries. Maybe it’s genetic. My parents and I pass around the latest volumes of various mystery series and devour them like candy. One of the longest-standing series that my dad has been following is the Spenser series by Robert Parker, and there are a lot of them around the house, just waiting to be picked up. In my post-graduate school period of unemployment, I read quite a few, and it’s clear that Spenser is one of the few remaining hardboiled detectives.

As the Wikipedia article defines them, hardboiled detectives have the following characteristics:

END_OF_DOCUMENT_TOKEN_TO_BE_REPLACED

Scooters that stay where you put them

As an addendum to Kevin’s appraisal of the Scooter Libby commutation, I heard this short story on NPR’s All Things Considered yesterday: Quiz Show Draws US Attorney. Special prosecutor Patrick Fitzgerald, the man who actually prosecuted Scooter Libby and had him convicted, will be appearing on the NPR news quiz show, Wait Wait… Don’t Tell Me! He will be answering questions for the “Not My Job” segment, on the subject of… scooters.

My favorite part? They gave him a present for being on the show, (which they don’t normally do.) A child’s kick scooter, engraved with the words, “To Patrick Fitzgerald, USA: This one will stay where you put it.”

Listen to the segment, because there are several other amusing anecdotes. Or even better, try to catch the full show this afternoon.